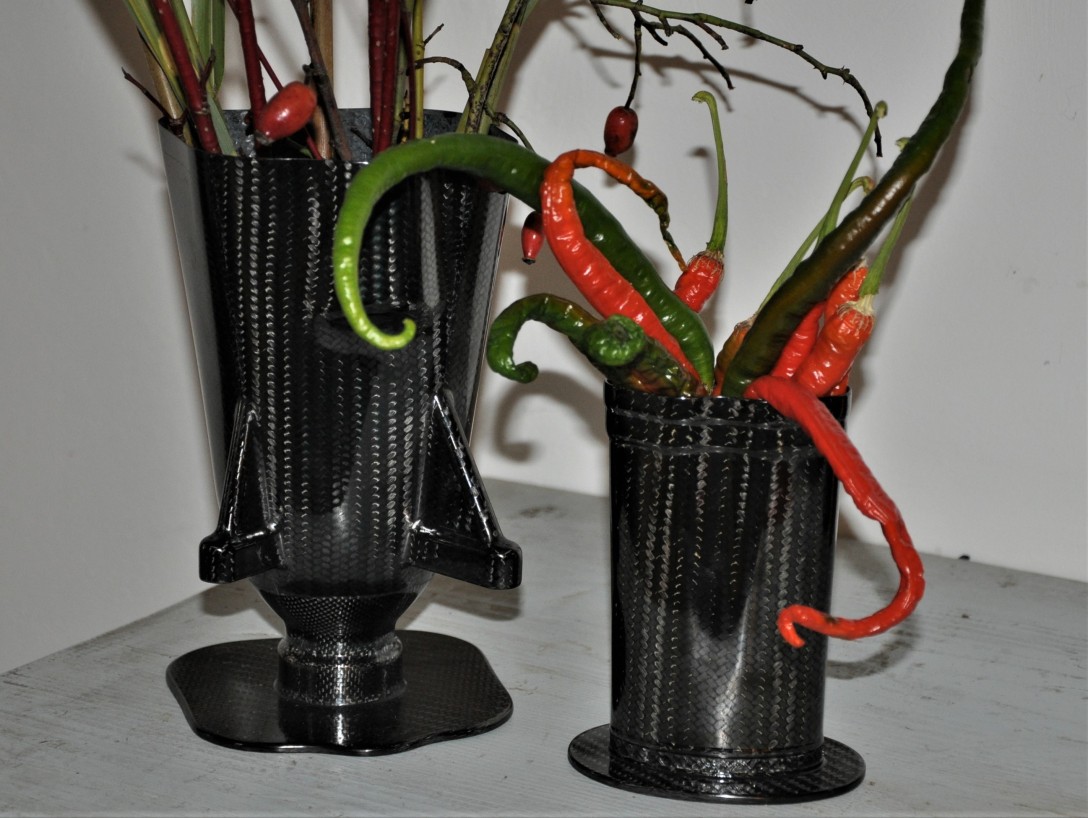 I had to get permission to use these vases. They are new to my collection, and only one (the large) actually holds water. 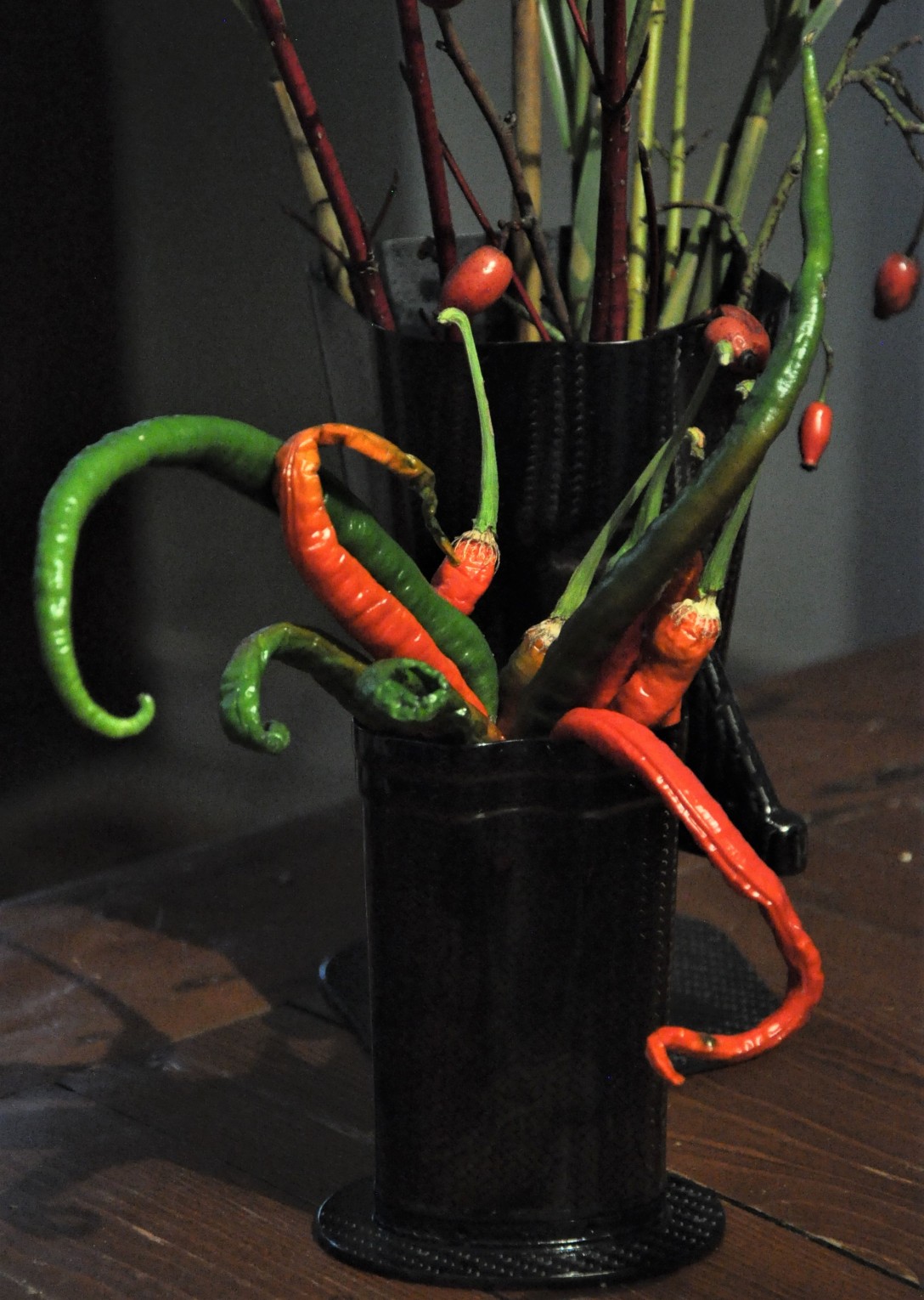 Their origins are top secret – created by the Bon Viveur at work, from the debris produced while making bodywork for Formula 1 cars. They are made of carbon fibre. 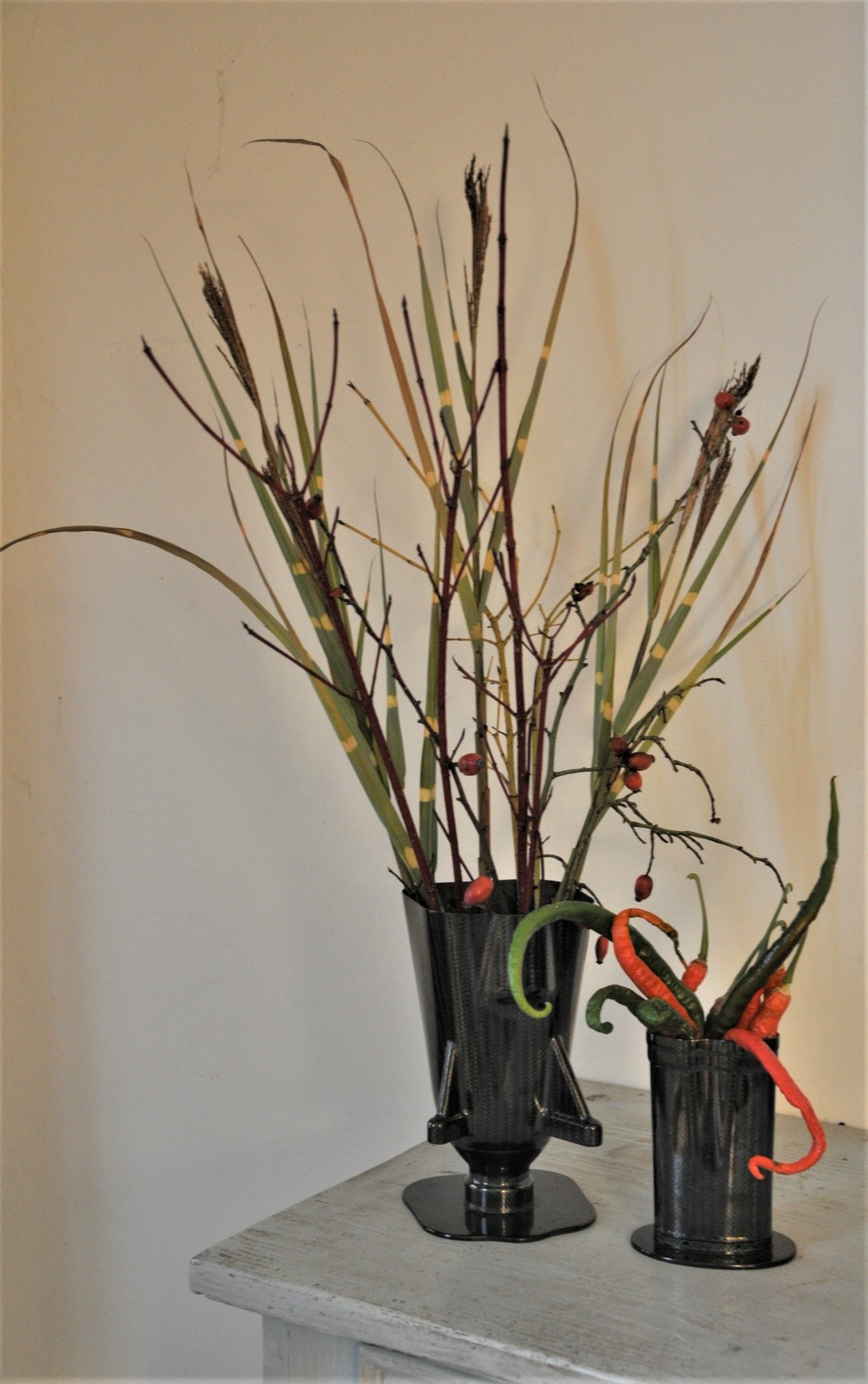 But he says that so few people ‘follow’ me that his secret is probably safe with me. Shhh … don’t tell!

He calls them his ‘Easter Island’ vases. I think you can see why … 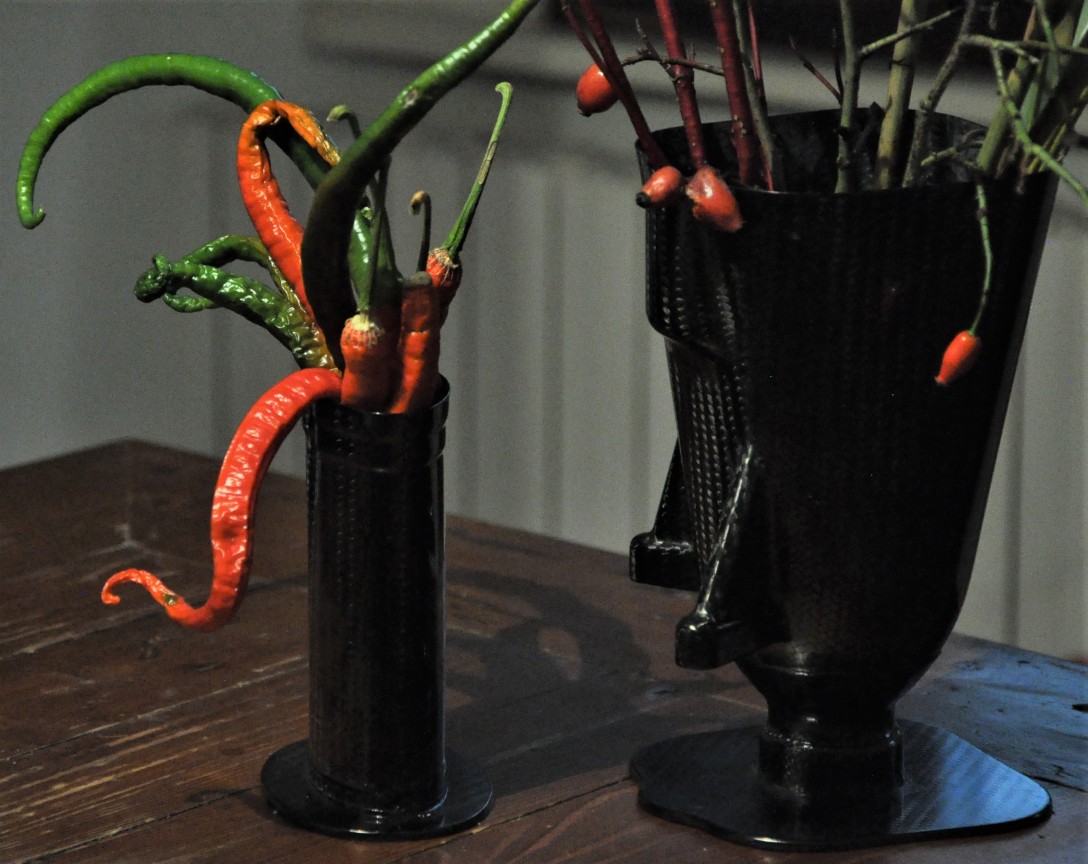 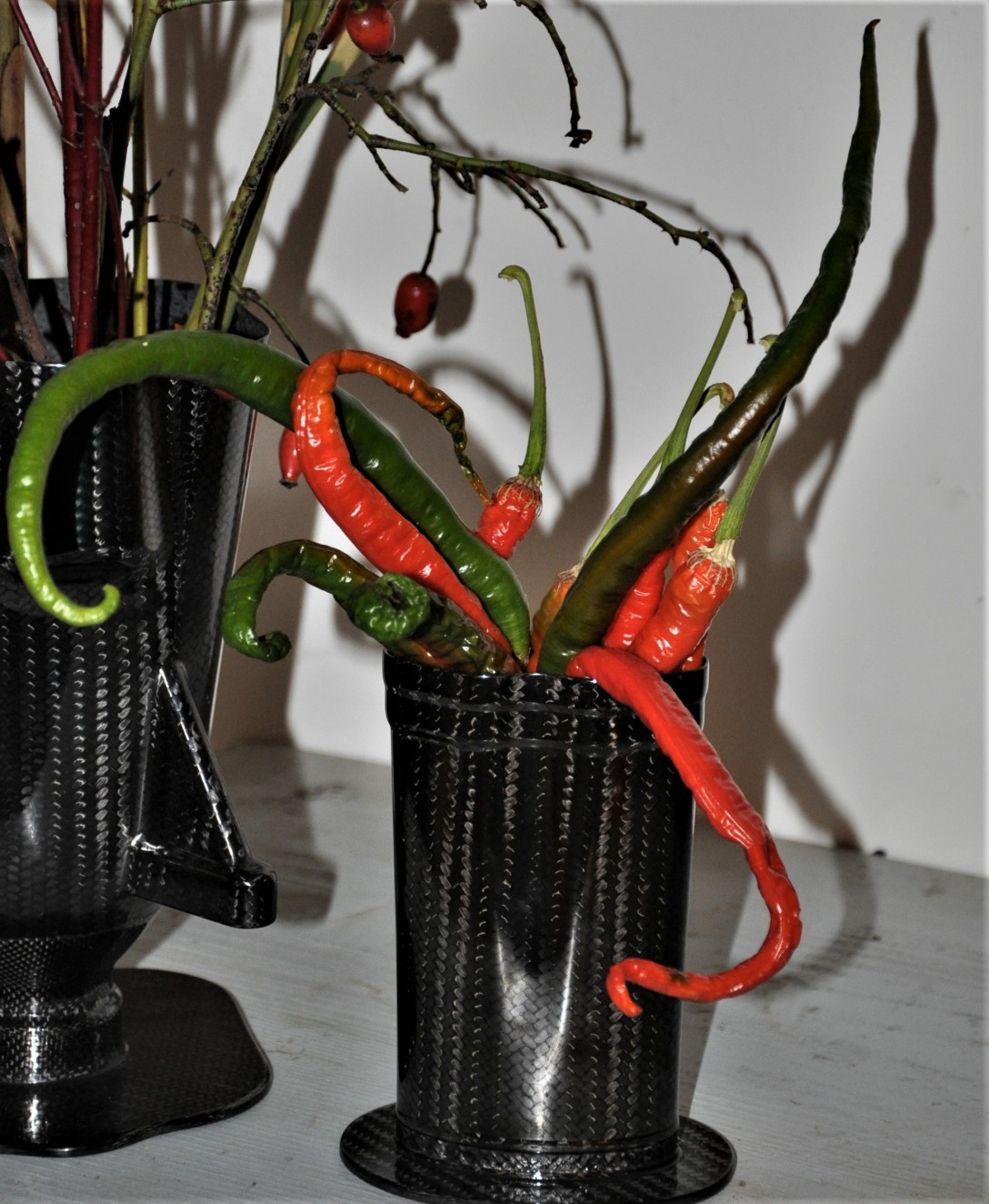 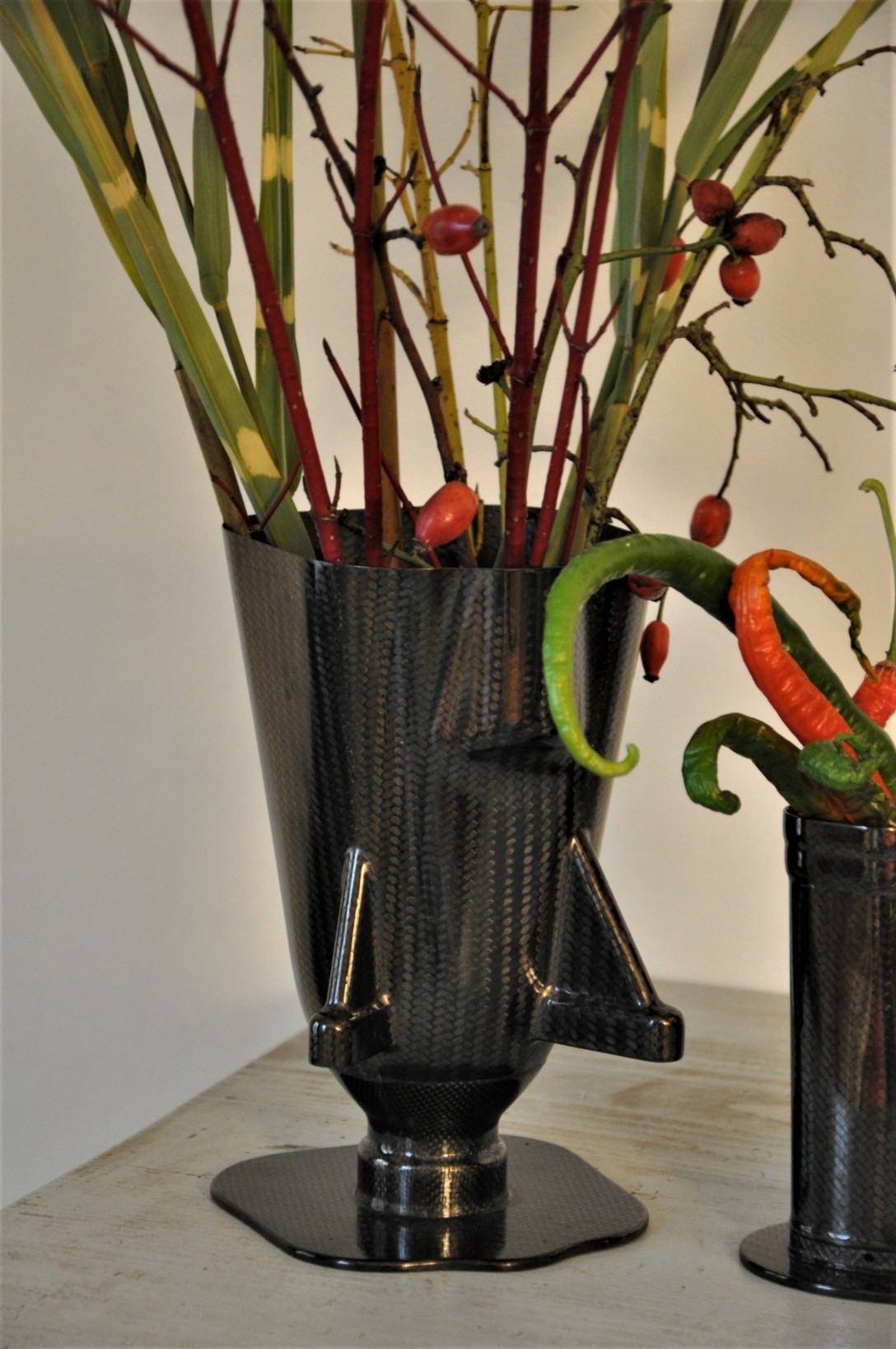 I did fill one up with flowers when he brought it home in late August, but this is the first time since then. 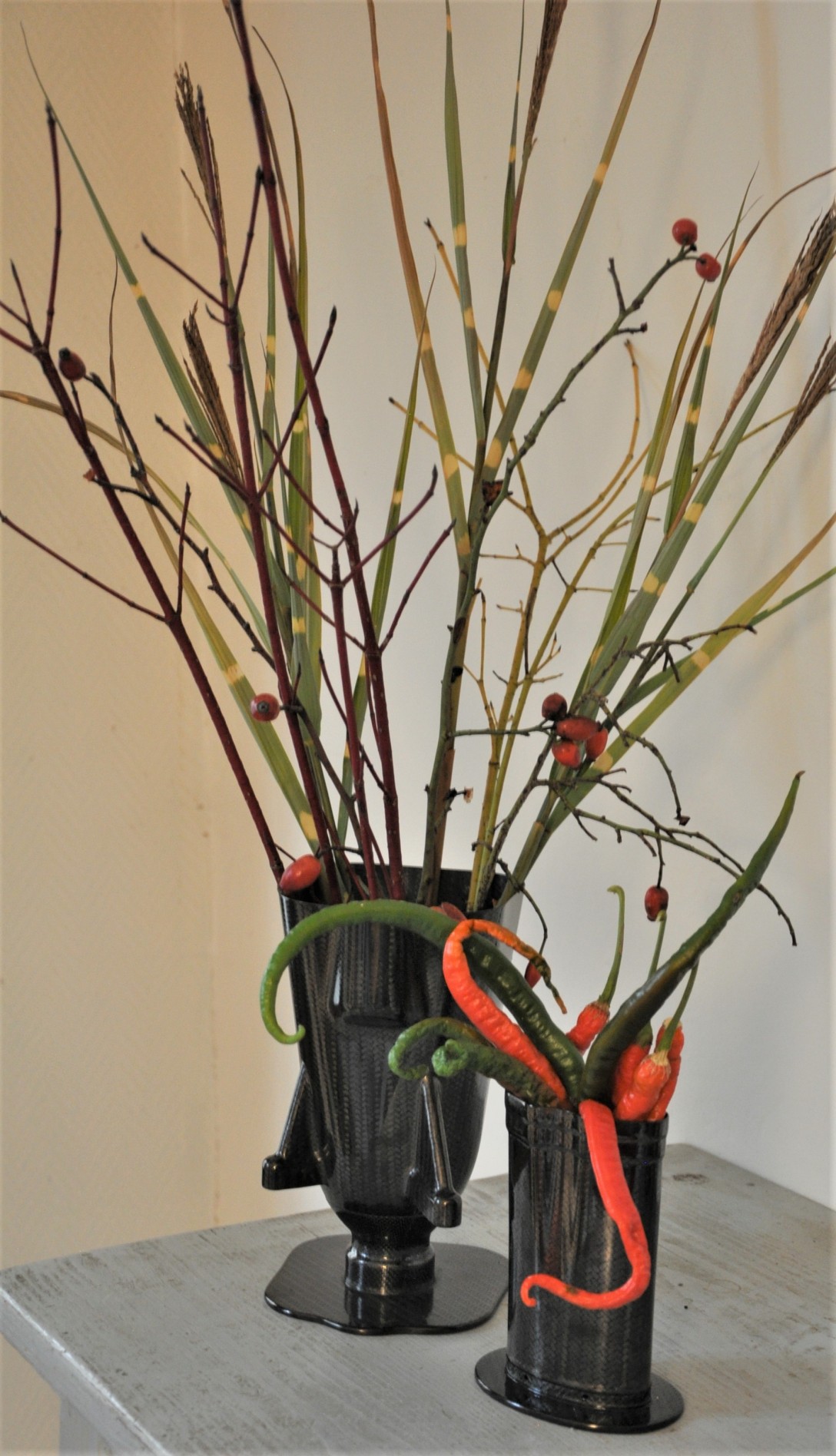 I like the big one, because it has a wide neck and I don’t have a lot of those. The smaller one I wasn’t sure what do do with and then he started putting my crop of chilli pepper ‘Joe’s Long Cayenne’ into it. 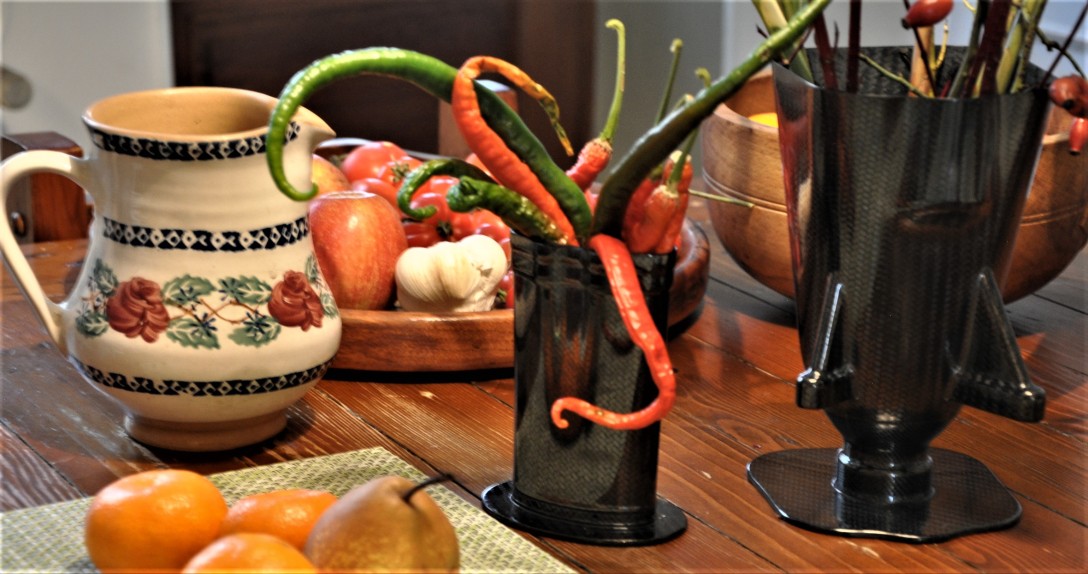 Finally the penny dropped and I realised he should be doing IAVOM, not me! I added  Miscanthus sinensis ‘Zebrinus’, Cornus alba ‘Sibirica’, Cornus stolonifera ‘Flaviramea’ and  Rosa canina hips in the larger vase.

And I have to thank Cathy at Rambling in the Garden for finally getting me to sweep under my kitchen table – if I take pictures of my IAVOM vases in winter, they always move around the house and the kitchen is turned topsy turvy in the process. Tidying becomes essential. 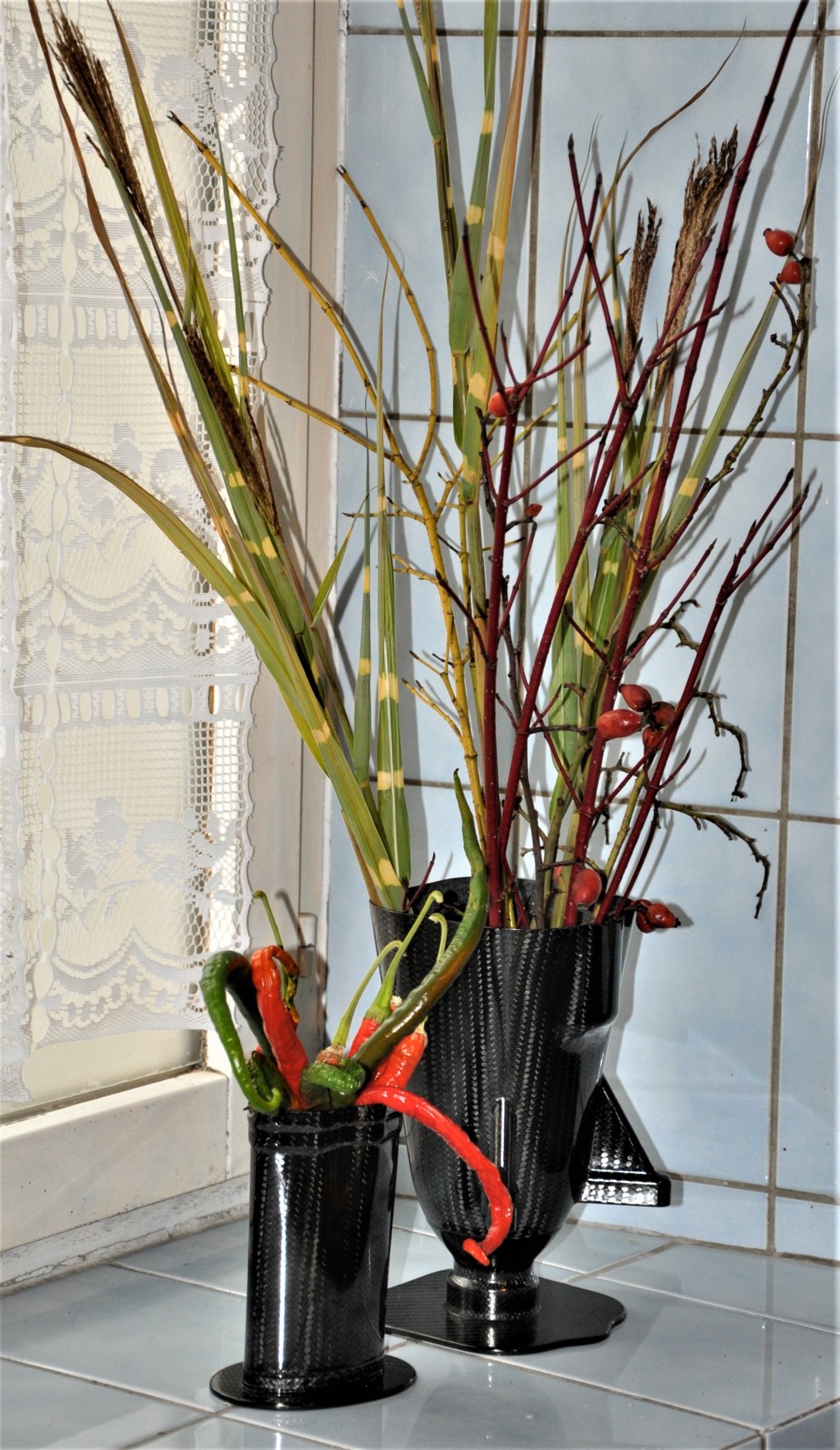 Here are the vases on a cupboard in the kitchen … 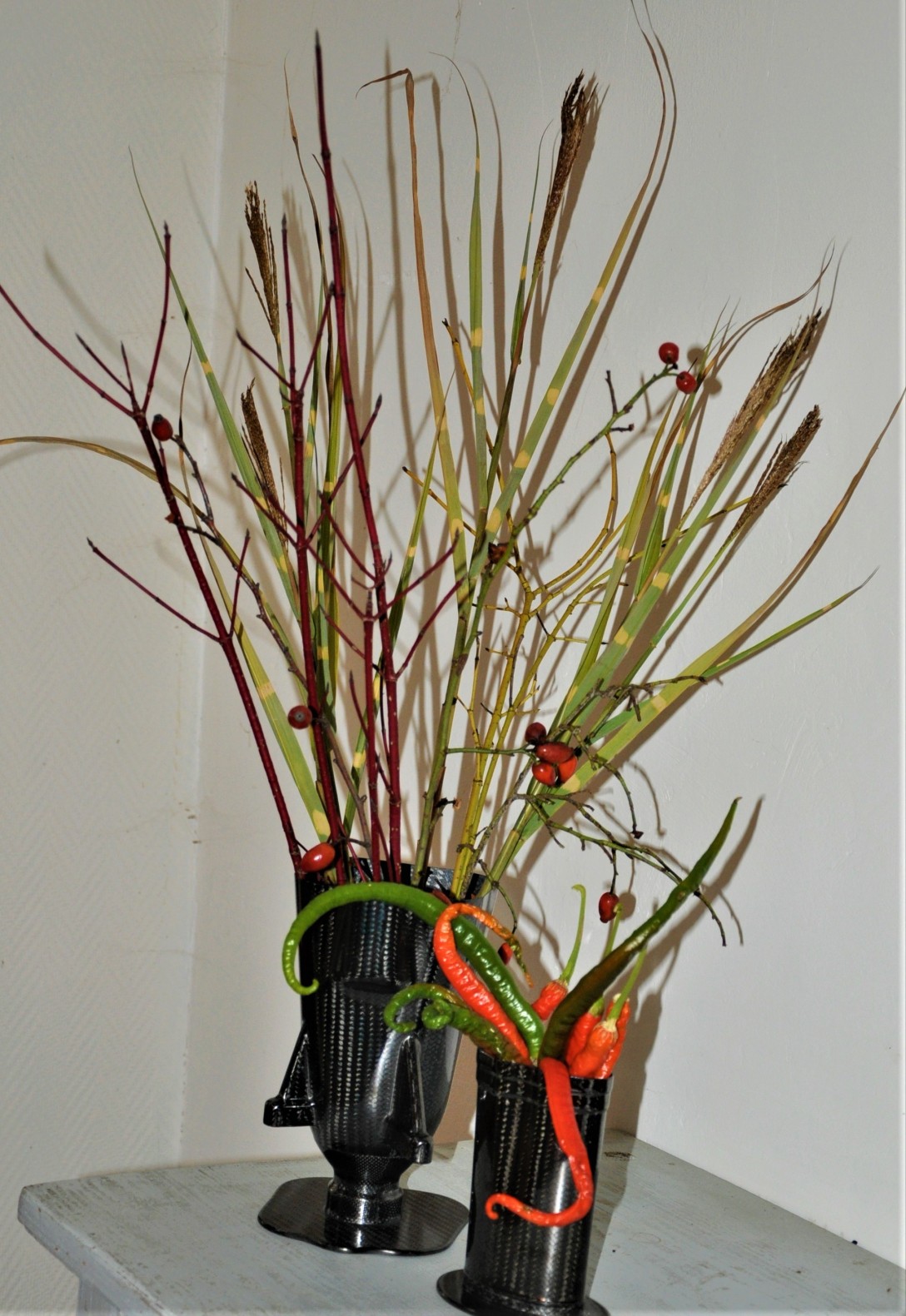 And back on the cluttered kitchen table where they will live for the rest of the week. 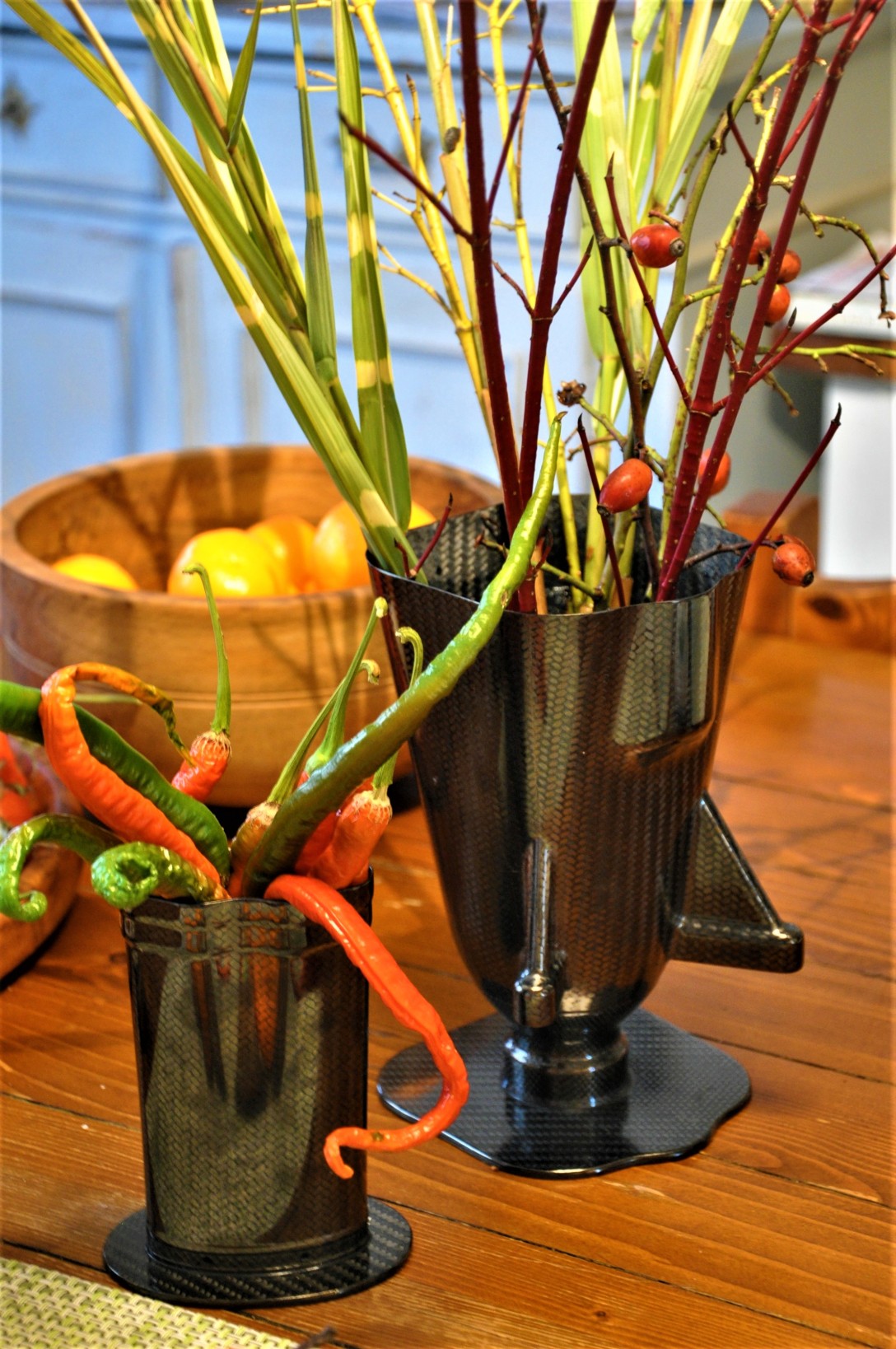 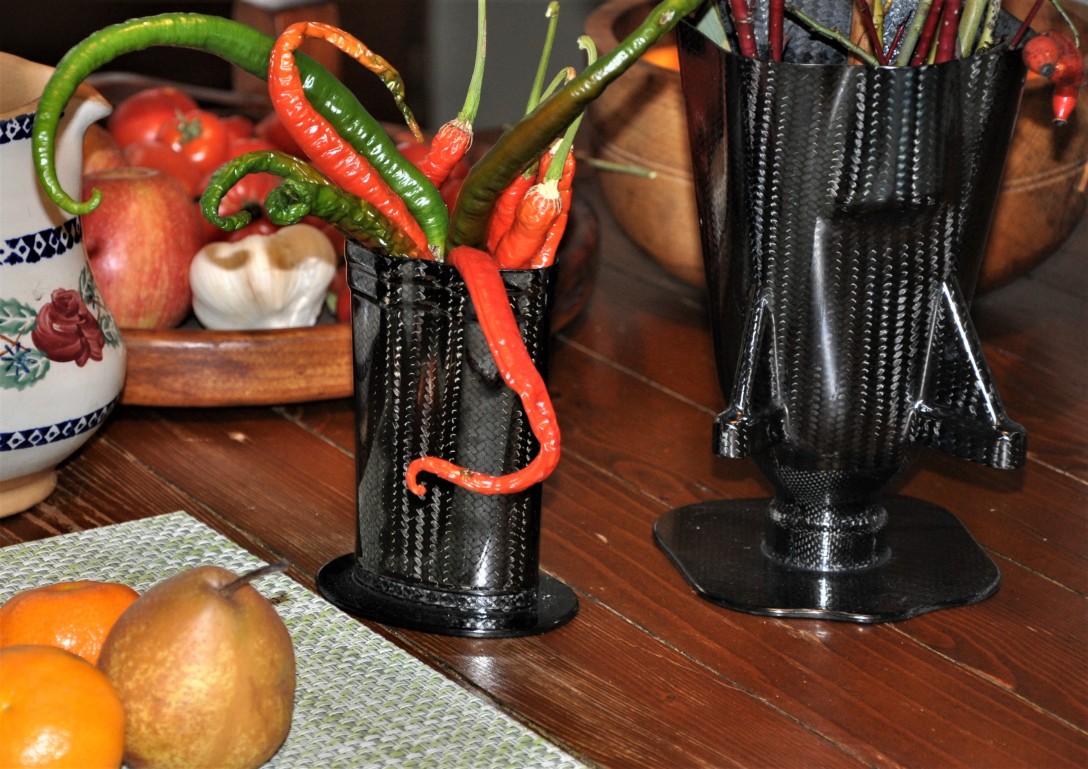 Thanks to Cathy for more than getting me to sweep under the table – she is also the gracious host of  In a vase on Monday. Go on over and have a look at the other vases. 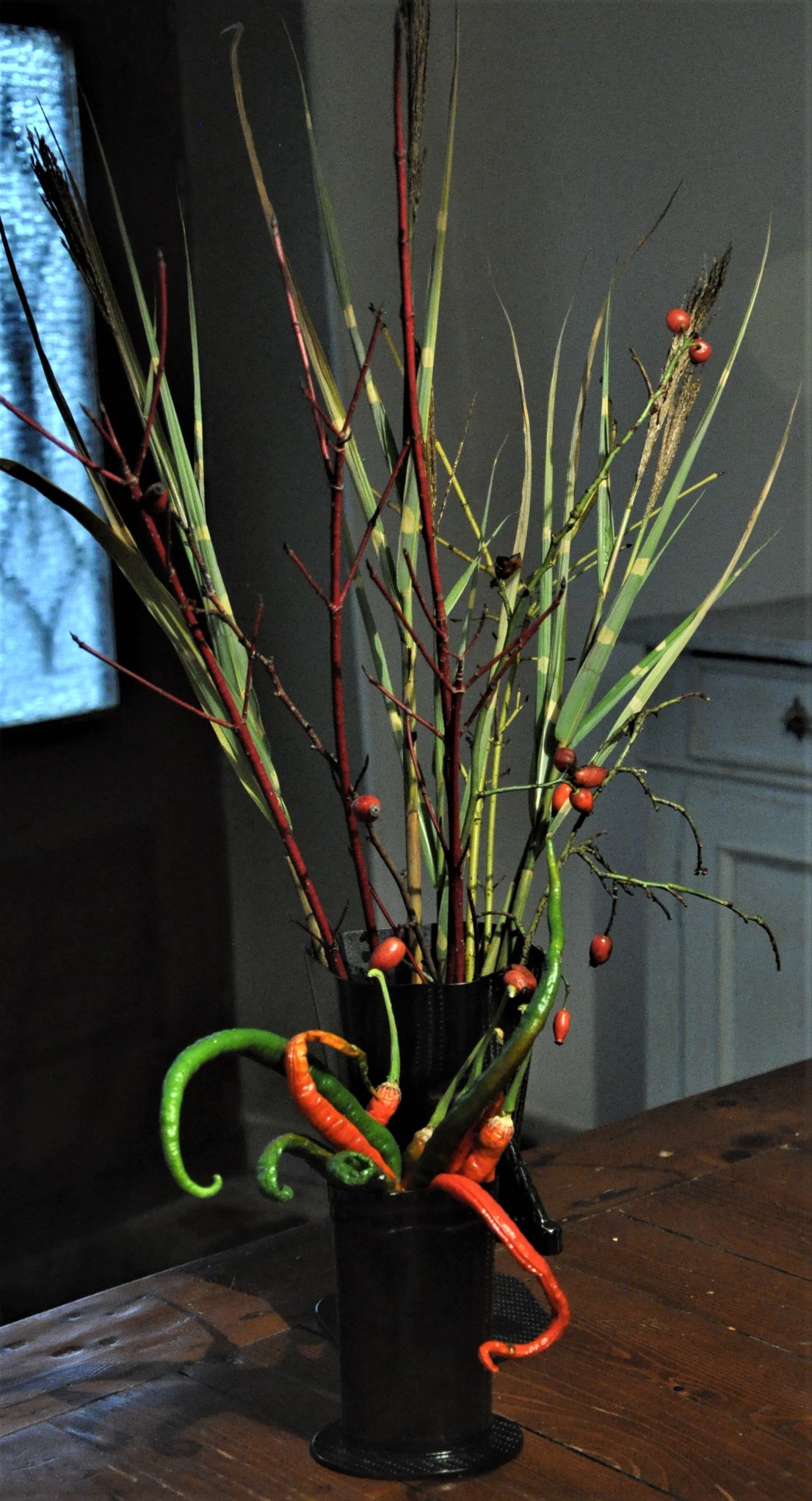 24 thoughts on “IAVOM Pick a pot of peppers”