I have a bit of a secret passion for Hybrid Tea roses – this isn’t very trendy at the moment, but I’ve never been ‘cool’; I just can’t help it! I love their perfectly shaped flowers when in bud and half open. I grow so many old-fashioned roses, but they never quite do that bud-perfection thing, in my eyes. 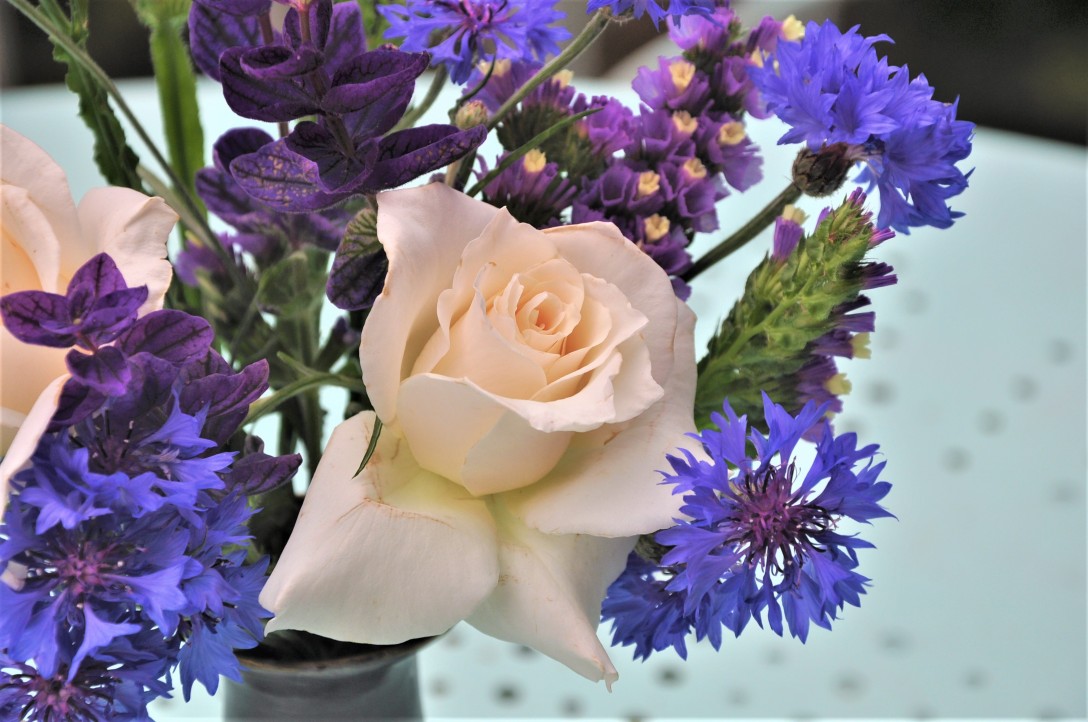 About three years ago I planted three HTs in the cut flower garden: white ‘Pascali’, red ‘Mr Lincoln’ and (for the Bon Viveur who has a fetish for all yellow flowers), ‘Grandpa Dickson’. The white and red are great successes, which is just as well because I spent hours researching ‘best red HT for cutting’, and so on. ‘Grandpa Dickson’ has been less than willing, however, showing the usual problems with roses on my soil – they take two or three years to settle, before quitting their habit of dying back a bit during the season. 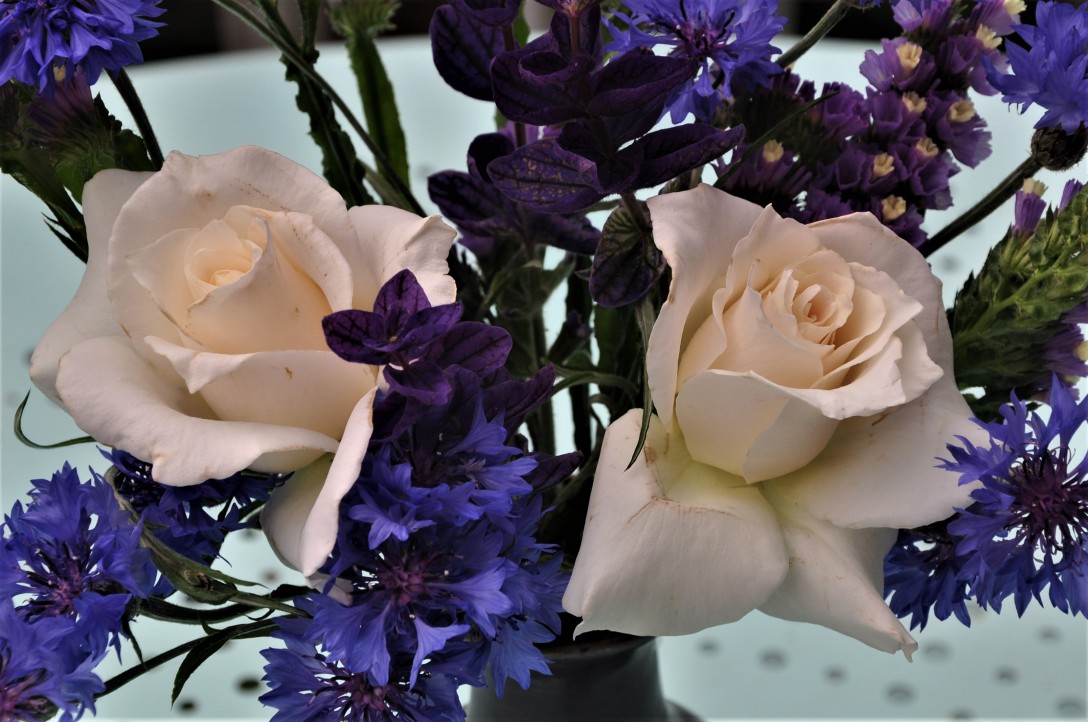 I teamed ‘Pascali’ with cornflowers and clary sage (Salvia hormium), both from a very disappointing sowing of Sarah Raven’s ‘Amethyst & Sapphire Mix’ annuals. I tried to keep the ground moist, but the Alkinet (Anchusa ‘Blue Angel’) that I really wanted didn’t show. I think I might buy seed separately and sow in cells in the greenhouse next year. I wasn’t so bothered about the lack of Verbena bonariensis, also included in this four-variety mixture, because there’s plenty self-sowing elsewhere in the garden. It’s a nice idea – although it remains ‘theory’ here!

I just scattered seed, which doesn’t usually work on my soil. Usually I sow cornflowers in situ with pot marigolds and nigella, because I like the way they all flower for a long time and hold each other up. 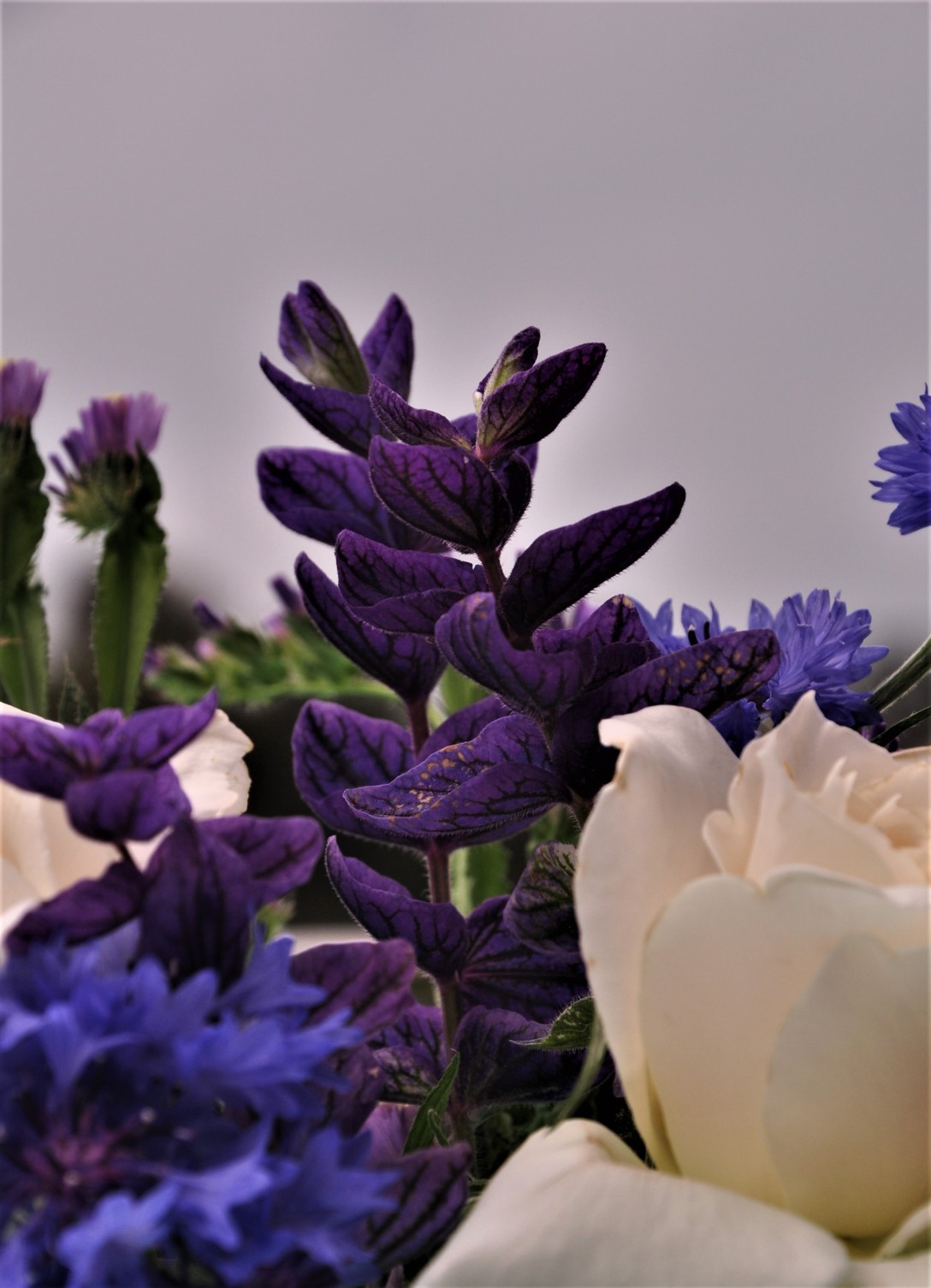 But this year I had planned to change the position in which I put them (down in new beds in the orchard). Unfortunately the beds never got dug, so the annuals were never sown! But I’m already flexing my digging muscles to get it done this autumn. 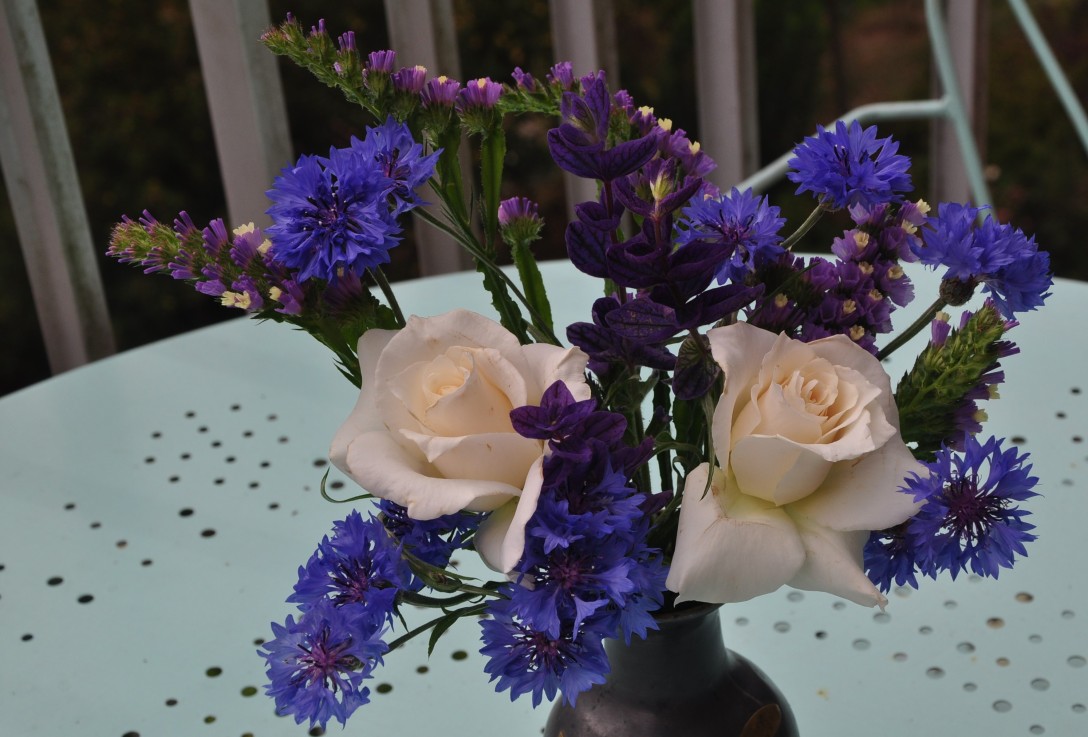 There’s also some statice (Limonium sinuatum), which started producing very late this year. In the past I’ve grown the more perennial sea lavender, Limonium latifolium, from seed. But when planted in the garden they just petered out.

The container was a present from an ex-partner over 30 years ago. The little duck’s a bit of a cutie, but he’s usually swimming away from his vase in another (dusty) part of the house, currently being decorated.

It was quite nice to reunite them – for probably the first time in about 10 years – with this IAVOM post. Hopefully they’ll become inseparable again now.

The duck is actually a little trinket box. For the same incredibly long 30 years he’s been home to some flowers of edelweiss given to me by the gardeners when I left an garden in the Bavarian Alps where I did an exchange for a few weeks. I swore I’d go back, but they were right, I never did.  How many poignant little memories we all have tucked into dusty corners of our homes!

Go on over and see what all the Monday vasers are doing at Cathy’s ‘Rambling in the Garden‘ blog.