Gosh – it’s been such a long time since I blogged (my August Indulgence, in fact), never mind contributed something to Cathy’s nice meme at Rambling in the Garden. 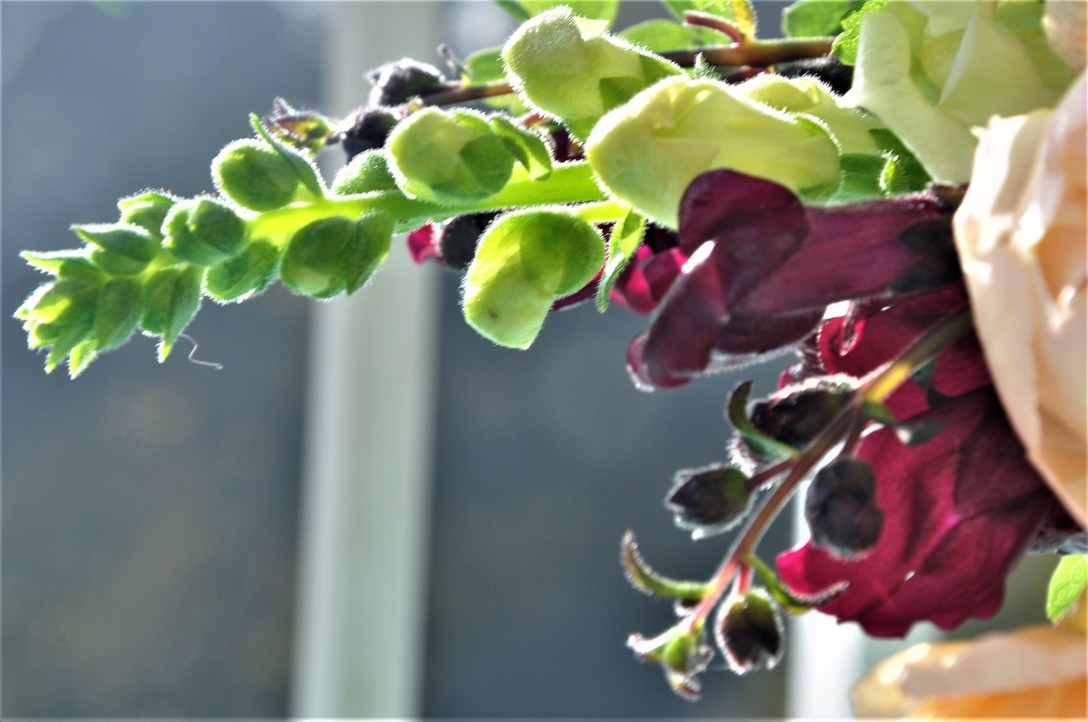 Fully determined, I was, this morning, to pick some of the last roses flowering in the garden. But the endless rain did for them yesterday and instead of coming back with a large bunch of ‘Louise Odier’, ‘Mme Isaac Pereire’ and ‘Mme Alfrede Carriere’ (the first two being Bourbons, the last a climbing noisette, I think), I tried to focus on my snapdragons instead.

There are only two this year and, actually, they also are not too hot at the moment either! I grew ‘Black Prince’ (with nice dark foliage, but stems that are really too short for cut flowers) and ‘Rocket White’ (much more pleasing, with lots of long-stemmed flowers over a long period). I think I had a mind’s-eye picture of a small vase of the red antirrhinum with maybe some small Ammi majus flowers as well.

But as happens only too often, it didn’t quite turn out that way. Still, I like the autumnal feel of the vase. There are two roses – climbing ‘Wollerton Old Hall’. This is one of the most luscious roses it’s ever been my privilege to give a home to, but you can see it’s suffered from our heavy rains this year. More than its fair share of black spot – when will I learn to do the last minute primping properly!

And then there’s a bud of ‘Sweet Juliet’, which I’ve found makes a really good cut flower, along with ‘Queen of Sweden’. 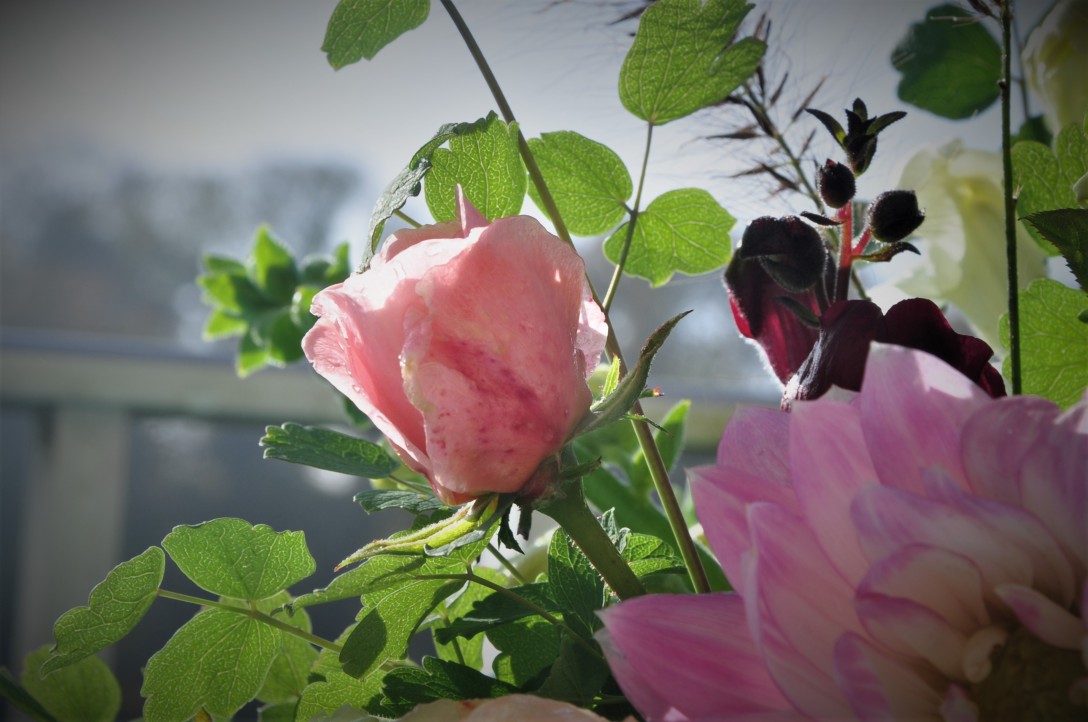 However – and I will probably be accused of being a bit retro here – the truth is I’ve never regretted buying three Hybrid Teas in 2017. They make much more classic cut flowers than the old roses or David Austin’s group. Long stems and plenty of perfectly shaped buds. The best has been white ‘Pascali’, followed closely by sweetly scented dark red, ‘Mr Lincoln’. Pity I never shared them with you, but I’ll be adding some more colours next year and I’ll try and do Monday vases with them. Can you suggest other good cut flower HTs?

And there is an unnamed pink dahlia …

Pink is not usually ‘my’ colour in dahlias – I prefer the dark purples, which I keep losing over winter – but this flower has a sort of grace and delicacy that I’ve enjoyed greatly this year.

Then I added some Zinnia ‘Benary’s Giant Lime’ and the greyish-blue foliage of Thalictrum flavum subsp. speciossisum, which was cut back in July and is now good and fresh again. I seem to use it endlessly – hopefully I’m not boring you?! 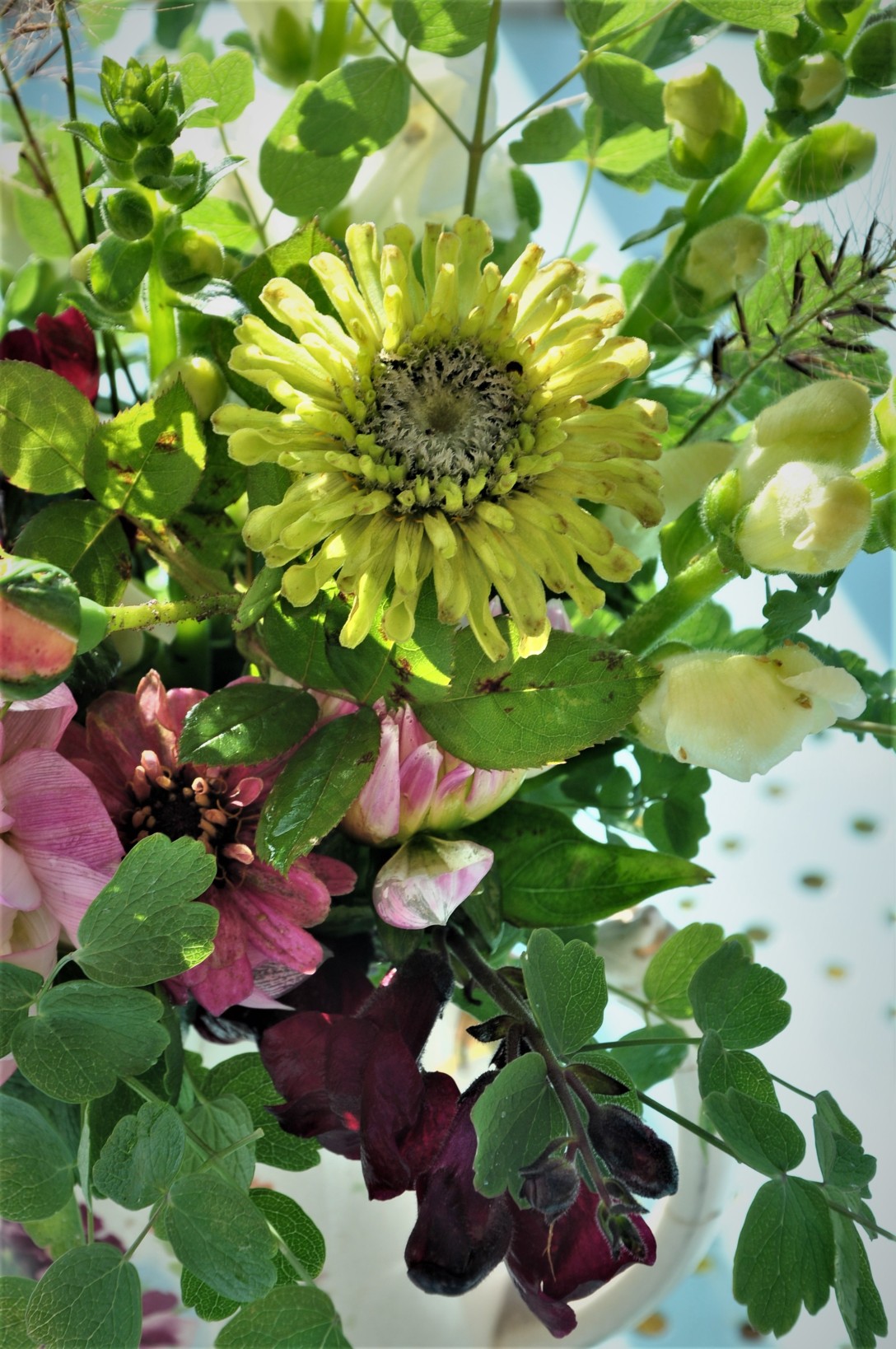 Finally three flower spikes of Pennisetum alopecuroides. I’m still struggling to find a good position for this grass which was, as they say in the States, a ‘pass-along’. It keeps being dumped down behind other plants and never gets to show itself off much as it deserves.

Isn’t it funny how you spend a fortune on some plants that don’t thrive, and then others – lovely gifts –  are neglected, but still persist. There’s a bit of transferable gardening philosophy there.

Lovely to be sharing with the Monday vasers again. Life has just been so darn difficult recently … time for another new leaf, I think!